POSTED IN Standings | no comments

Any time a team in any professional sport wins a championship a target is painted directly on their back the following season as every single team in there league will be giving them all they can handle each and every night. The Los Angeles Lakers have not only had to endure that treatment last season, but they have done it again this and so far they have come out on top as they are arguably once again the best team in the league. 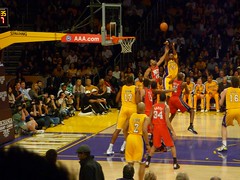 Throughout this entire NBA regular season people have doubted the Chicago Bulls chance of competing with the best of the best and being able to make a run at an NBA title. As of yesterday, those doubts have vanished as the Chicago Bulls are officially owners of the best record in the Eastern Conference ahead of the Boston Celtics and the Miami Heat.

Even though this team still has to prove themselves come playoff time, they have play extremely well at this point and have a lot of people talking about a Bulls-Lakers NBA Finals at season’s end.

All season long the San Antonio Spurs have been the best team in the league statistically and record wise. Even though they will almost certainly head into the playoffs as the number one overall seed in the Western Conference and the league’s best record, they have really shown some flaws as of late with two big losses to the two-time defending NBA champion Lakers and the revamped Heat.

If any team can turn it around and get back to playing dominant basketball on both ends of the floor it is the Spurs, but they will need to step it up from here on out if they expect to contend with the Lakers come playoff time.

Image by Getty Images via @daylife

Like most of the teams on this list, the Dallas Mavericks fell victim to the defending champs recently as Kobe Bryant and company came into Dallas and just dominated the Mavs from start to finish. Not only did this loss ultimately result in the Mavs dropping to the third seed in the West, but it may have also damaged their confidence if they should meet the Lakers during the playoffs.

It wasn’t all that long ago that the Boston Celtics were considered to be arguably the best team in the league as they were dominant on both ends of the floor, especially defensively. Ever since they made the trade sending arguably their best defender in Kendrick Perkins to the Oklahoma City Thunder, this team has really struggled to get back to form and as a result have been knocked out of the top spot in the Eastern Conference and are in danger of falling out of the top five on this list.

Next Article: Can the Grizzlies upset the Spurs in the playoffs?