POSTED IN NBA Trades | no comments

Image by Getty Images via @daylife

The Baron Davis trade to the Cleveland Cavaliers from the Los Angeles Clippers was just the first of many deals made on the NBA trade deadline on Weds. Feb. 24, but the one trade that might have the biggest impact is the one that the Boston Celtics made with the Oklahoma City Thunder.

There is no doubt that the Oklahoma City Thunder is one of the most promising young teams in the league led by the league’s leading scorer Kevin Durant, but they have had some serious issues in the paint with the inability to compete against big teams like the two-time defending Los Angeles Lakers. With that being said, the Thunder decided to make a bold move on Wednesday by acquiring one of the best big men in the league in center Kendrick Perkins.

Over the past couple of years, Perkins has been the Boston Celtics main man in the paint as he is more than willing to do all the dirty work and concentrate on cleaning up the glass. Along with the ability to bang with the best of them in the key, Perkins can be an offensive threat with his back to the basket or as a jump shooter.

Ironically enough, the Boston Celtics have used Kendrick Perkins as somewhat of a scapegoat for their loss to the Los Angeles Lakers in the 2010 NBA Finals. With Perkins suffering a season-ending knee injury, the Celtics just weren’t able to contend with a much bigger Lakers squad in the paint.

Fortunately, the Celtics were able to get their defensive-minded center back on the floor recently, but in an interesting twist, Celtics GM Danny Ainge decided to trade the big man to the Oklahoma City Thunder for forward Jeff Green. 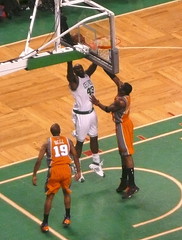 The core of this deal is without a doubt Kendrick Perkins and Jeff Green, but the Celtics also traded away backup point guard and spark off the bench in Nate Robinson. In my opinion, this deal makes absolutely no sense for Boston as the Celtics get smaller and lose one of the better backup point guards in the game. Jeff Green is a solid player and a could be a very good addition to this team in the future, but as for right now, this trade could seriously affect Boston’s chances of contending with the Miami Heat, Chicago Bulls and the Orlando Magic in the playoffs.

Other parts to his deal include the Thunder sending forward Nenad Kristic to Boston. Even though Kristic is considered a “big man” he is more of a shooter and isn’t a player that plays with his back to the basket like Perkins.

Personally, I believe this deal is an awful one of the Boston Celtics and a steal for the Oklahoma City Thunder, but Celtics GM Danny Ainge must have something up his sleeve as Boston is one of the Eastern Conference superpowers and could be well on their way to an NBA title. With that being said, Ainge must have plans to sign some veterans or something else in mind.

Next Article: Clippers trade Baron Davis to the Cavs for Mo Williams and Jamario Moon