Nets and Nuggets reportedly reach a deal for Carmelo Anthony

POSTED IN Rumors | no comments

The Denver Nuggets MELO-drama may finally be over heading into All-Star weekend in Los Angeles has reportedly they have made a deal with the New Jersey Nets. Obviously, this situation with Carmelo Anthony is complicated to say the least as a contract extension will have to be signed in order for this deal to go through, but signs are all points who deal that could be made during this All-Star weekend.

A few months ago, the trade rumors involving superstar Carmelo Anthony started to swirl around the league as it was reported that the All-Star forward had no intention of signing the $65 million three-year contract extension with the Denver Nuggets. Once this news surfaced, a lot of teams around the league start to get very interested in arguably one of the best scorers in the NBA.

The first team to show their interest in Carmelo Anthony was the New Jersey Nets. With new Russian billionaire Mikhail Prokorov at the helm of the Nets and a bold statement saying that they will be a title contender in the next five years, New Jersey has become a team that is willing to take bold chances including going after one of the best players in league. 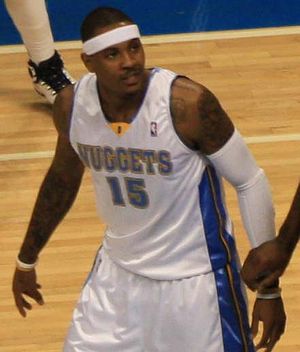 Of course, the New Jersey Nets weren’t the only team interested in Melo as the New York Knicks and the two-time defending NBA champion Los Angeles Lakers also had interest in acquiring the All-Star forward.

With Melo playing his college basketball with Syracuse and his wife Lala Vasquez working in the Big Apple, the Knicks seem to be the team that would inevitably end up with Anthony as he said he would sign a contract extension if he was traded to New York. The Lakers also heard team that Anthony was willing to sign an extension with, but despite a lot of trade rumors coming out of Los Angeles, the defending champs never seem like a real option for the Denver Nuggets.

Fortunately for New Jersey, they may have been able to convince Denver to make a deal which could have Carmelo Anthony playing in a Nets jersey sooner rather than later.

Reportedly, the New Jersey Nets and the Denver Nuggets have reached a deal, but it all depends on whether or not Carmelo Anthony is willing to sign a contract extension with the team. If Melo doesn’t sign an extension or has no intention to, the deal will fall through and this MELO-drama will start this all over again.

At this point in time, the Denver Nuggets are desperate to make a deal as they stand to lose more than any other team if they can trade Antony before the NBA trade deadline on Feb. 24. With that being said, they will be doing everything within their power to get this deal done as fast as possible.